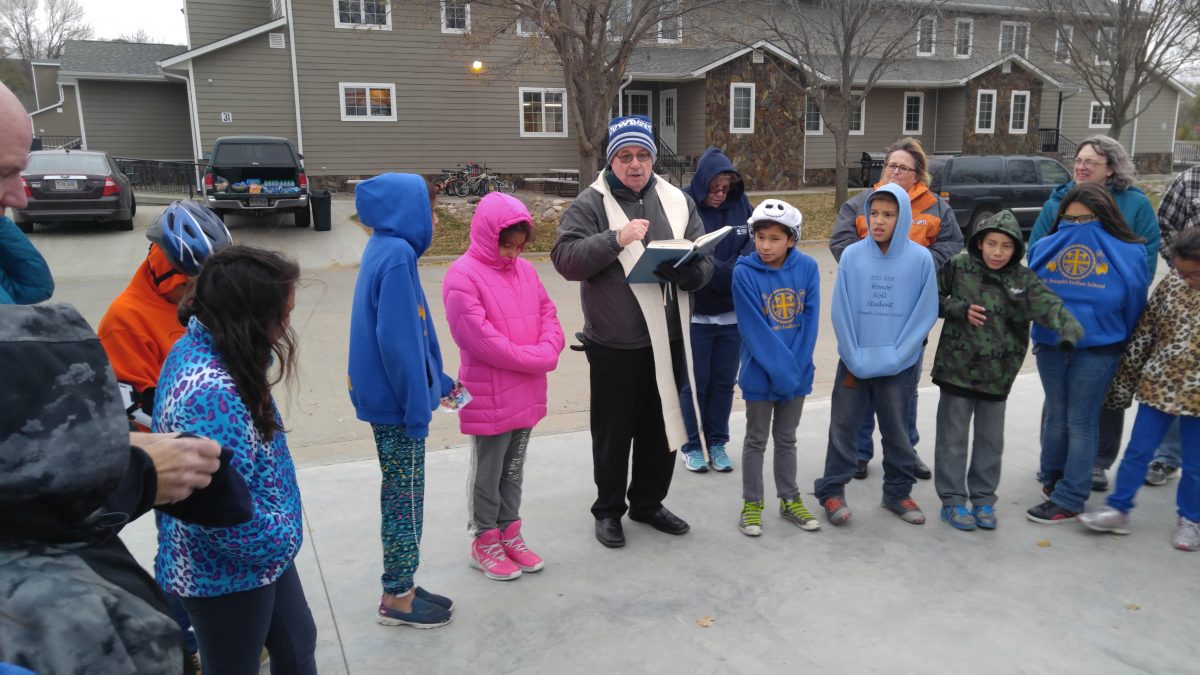 SNOW
The good weather South Dakota has been blessed with took a harsh turn when snow, wind and falling temperatures all hit at once. Just across the Missouri River, nearby towns were hit with 3 inches of snow.

A special thank you to our maintenance staff who were hard at work early in the morning to keep our campus open. The temperatures had dropped and the wind had come up the day before, which made for a chilly blessing for our new outdoor basketball court, donated by a benefactor from the Chicago area. The court will be a new spot for our students to develop their skills and have some fun. END_OF_DOCUMENT_TOKEN_TO_BE_REPLACED

Greetings from the banks of the Missouri River!  The weather is still mild, which is great for the hunters, but not so nice for the farmers and ranchers.

Fr. Steve and a group of students and staff headed for the Big Apple this weekend for a donor luncheon.  Last year when they tried, Hurricane Irene brought everything to a standstill.  This year they are coming in right behind Superstorm Sandy.  The group took letters of support and encouragement from all the students at St. Joseph’s to those impacted by Hurricane Sandy.  They were passed out at the lunches so that our guests and others would know that they have not been forgotten as they face the challenge of putting their lives back together.

A variety of things happened here at St. Joseph’s that highlight the activities and events our Lakota students can get involved in.  Our student council leaders went to the state capitol in Pierre, South Dakota to be part of more than 90 schools, churches, veterans groups, social clubs and others designated to decorate the Christmas trees that are being set up around the capitol building.

Our inter-city basketball league is going great guns and we have been able to see some good results.  There was a young lady last year from Chamberlain who got involved but did not seem to get a lot of playing time.  This year when the Chamberlain Cubs came to play the St. Joseph’s Braves, she was part of the team!  She seemed to be the first or second one off the bench.  It shows the impact the program can have because it gave her the opportunity to improve herself and make new friends.  The boys from the area are taking part in the program now and the games have been interesting.

This past Sunday, the Diocese of Sioux Falls, South Dakota held a Mass of Thanksgiving in honor of our first Native American Saint, St. Kateri Tekakwitha, the Lily of the Mohawks.  Several of our students went to the Cathedral of St. Joseph in Sioux Falls to take part.  Besides the Mass, a statue was erected in her memory and honor.  As Kateri is a patron saint for ecology, the group then visited butterfly complex to see beauty in flight.  They ended the day by driving by the water falls that give Sioux Falls its name.  The falls are lit, making for a very picturesque scene.

Recently one of our high school students, Erika, had the privilege of casting her first vote in a national election. What really made it special, however,was that she was interviewed as she came out of the polling area and was asked which issue meant the most to her.  Her response was the bond issue the local high school was trying to get approved that would help fund a new cultural and activity center at Chamberlain High.  Erika saw it as a valuable addition to the school, but sadly it went down to defeat since it needed 60% plus one of all those voting.  It only got in the mid-50% range.

Things are getting interesting for our high school students as the winter sports of wrestling and boys’ and girls’ basketball get under way.  Wrestling started last week and some of our young men are going out.  Girls’ basketball got underway today, which means several girls will be staying over the Thanksgiving Break so they can attend practice.  The boys hit the court next Monday and a good number are planning on going out for that.

As we approach Thanksgiving, it is a reminder of our gratitude for your generosity.  The students and staff  keep you in their prayers.  May the Great Spirit bless you with good health, much happiness and safe travel if you are heading ‘over the river and through the woods to Grandmother’s house we go!’

Greetings friends of St. Joseph’s Indian School!  I hope the Feast of All Souls Day finds  you doing well!

Things here on St. Joseph’s campus are going well!  It is hard to believe we have finished our first quarter of school and are already a couple of weeks into the second quarter.  My, how times flies!  The students are working hard to keep their grades up and do well in school.

Halloween was a great hit.  Most of the kids dressed up in costumes and there were some great costumes!  The students were able to trick-or-treat here on campus and then take part in a costume contest.  Some of the homes also went into Chamberlain to trick-or-treat as well.  All of the students I have talked to say they really enjoyed Halloween!

With Halloween past us now, the next big events on the campus of St. Joseph’s Indian School are girls basketball, Thanksgiving and Christmas.  We haven’t seen much snow here yet, so I wonder if we will have a white Christmas this year!

Our girls’ basketball seasons kicks off on Monday, November 5.  The girls are very excited to begin their season.  The girls are working hard in practice and learning all they can in the short time they have before their games begin.  Basketball season is always a busy time as all of the games take place between early November and Christmas Break.  With as fast as this school year is going, both Thanksgiving and Christmas will be here before we know it!

As we move closer to Thanksgiving, I would like to thank each and every one of you for all of the support you give to St. Joseph’s Indian School.  Please know that you are remembered in our prayers!

Thanks to our other staff members for keeping you up to date on school activities while I was away this past week.

I serve on my Religious Community’s (SCJ) Formation commission. We gathered to discuss the education and formation of our seminarians, as well as vocational efforts for finding quality people who might be thinking about becoming a brother or priest. A couple of us attended the National Religious Formation conference in Kansas City. The theme was about the prophetic nature of religious life. One keynote I particularly found inspiring was a look at many women prophets in the bible.
I did work in Formation with college seminarians for five years and that has shaped my philosophy of our programs at St. Joseph Indian School. We are trying to educate and form well-rounded young people, who have self-confidence, know how to work through troubles and adversity, love to learn and know how to take care of themselves and others.

I believe a key to all of that is having a solid relationship with God and trying to understand how we can follow God’s will and ways and use our gifts and talents accordingly.

One nice example that I heard when I returned was from the Cyr Home (4th-5th grade boys). For a service project they decided to help a family in need for Thanksgiving. All 12 of the boys did extra jobs around campus to earn a few extra dollars. They also made money from selling Powerade and water at football games. The boys made a list of what they would like to eat at Thanksgiving, and three of the boys looked over food ads in the newspaper. They learned about budgeting and discovered how much their dollars would buy. Four of the students went to the grocery store to buy the food. Others helped wrap the food and included a turkey plate they found at Central Storage. When all was in order, they delivered the food to the pastor of a church downtown, who delivered the food to the families so the students would remain anonymous. I’m inspired through their generous hearts and attitudes.

This afternoon, our third graders put on a hoop dancing performance. We sat on the floor against the wall in the school gym, and watched them make their hoops into the shape of butterflies and eagles and let their spirits soar as they danced. Good exercise, great fun and an appreciation of Lakota (Sioux) culture as well.

We had a journalist from Germany taking video of happenings around campus. At the end of the day, he was interviewing three of our high school girls, and asked a question something like, “Why is being away from home more important than being with your family?” Danisha, one of our seniors, wisely put it in perspective.

Nothing is more important than family. Being at St. Joseph’s gives me opportunities and an education so in the long run, I can help my family even more.”

Our mail room is a busy place as lots of holiday mail starts streaming in. I am so grateful that people think of us as Thanksgiving and Christmas approach. I realize this is a tough time for many people out there, which makes the generous sacrifices all the more meaningful.

I finished off a day of meetings by relaxing with girls basketball at the gym after school. Our 6th grade girls came alive in the 4th quarter, scoring 10 of their 16 points then, and coming from behind to defeat Pierre Indian Learning Center. I took in the action on the court part of the time, but sitting in the bleachers surrounded by 1st and 2nd graders, I had a whole group crowded around wanting to talk and tell me things. Tayron in particular had question upon question that reminded me of my baby brother Dan.

Every answer I gave, was always followed up with another, “How come?”